Look in the Mirror! 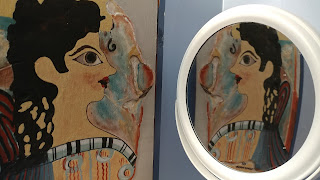 And this is to put it lightly!

The Metropolitan's letter has drawn the ire of the overwhelming majority of the St. Athanasius stewards and parishioners, because 'from the ground' they have seen the situation at St. Athanasius unfold in a way that is totally distorted and misrepresented in his letter.

Fr. Kastanas is accused of 'damaging the spiritual environment of the community' by allowing the 'distribution of hurtful and destructive communications throughout the Community' (I guess communications like this one would count among them). Apparently, even parishioners personal Facebook postings have drawn the anger and intolerance of the parish council and the Metropolis!

It all boils down to this question for the Metropolis.

Why isn't the priest the POLICEMAN of the community? Apparently the Metropolis feels that in the end they are the POLICEMAN, JUDGE and EXECUTOR of us ALL!

On the other hand, stewards and parishioners have:

All of these situations were reported to the Metropolis in writing, and personal meetings by multiple parishioners. All were pleading for a constructive involvement of the Metropolis instead of the one-sided, misguided support of a few 'favorites' in the St. Athanasius parish council who seemed to have the ear of the Chancellor, and inevitably of the Metropolitan, who proclaimed his unwavering trust in his person.

This is what the parishioners of St. Athanasius witnessed and that is why the anger and anguish over the Metropolitan's decision to relieve Fr. Kastanas of his pastoral duties (instead of draining the swamp of the parish council) is now so great.

Reap what you sow and look in the mirror!

It has been a very dark week! Today marks one week since the 28 year pastoral ministry of Fr. Nicholas Kastanas (or Fr. Nick as he is best known to his community) at St. Athanasius the Great, Arlington, MA came to an abrupt end (for some) and to a long tortuous conclusion for those that had followed the story closer over the last few years. On July 27th, the Metropolitan of the Greek Orthodox Church Boston Diocese relieved Fr. Nick of his pastoral duties, and asked the executive board of the St. Athanasius to post on the Church's web site Fr. Nick's dismissal letter (what many have called a character assassination ) that among other things charged that: "the Saint Athanasius Parish has been in a state of turmoil as a result of issues revolving, in large part, around the person of Fr. Kastanas. The Spiritual environment in the Community has been severely damaged by behavior that is wholly contrary to Christian values, which has resulted in, among other things, the d
Read more