It has been a very dark week! Today marks one week since the 28 year pastoral ministry of Fr. Nicholas Kastanas (or Fr. Nick as he is best known to his community) at St. Athanasius the Great, Arlington, MA came to an abrupt end (for some) and to a long tortuous conclusion for those that had followed the story closer over the last few years.

On July 27th, the Metropolitan of the Greek Orthodox Church Boston Diocese relieved Fr. Nick of his pastoral duties, and asked the executive board of the St. Athanasius to post on the Church's web site Fr. Nick's dismissal letter (what many have called a character assassination ) that among other things charged that:


"the Saint Athanasius Parish has been in a state of turmoil as a result of issues revolving, in large part, around the person of Fr. Kastanas. The Spiritual environment in the Community has been severely damaged by behavior that is wholly contrary to Christian values, which has resulted in, among other things, the distribution of hurtful and destructive communications throughout the Community. While this turmoil is not totally Fr. Kastanas' fault, nevertheless, he bears the greatest responsibility"

As Fr. Nick was served his dismissal papers by the Chancellor, his office back at St. Athanasius was raided by certain members of the parish council and the Metropolis. Personal item such as his laptop were confiscated and the locks at his office were changed. It could all well have been a scene from the movie 'Godfather'!

The whole dismissal affair was a public relations fiasco for Metropolitan Methodios, who instead of fulfilling his pastoral duty to handle with extreme care this major crisis of a thriving Christian community of 800 families under his jurisdiction, instead, chose to go on vacation to Greece and leave his underling Chancellor Fr. Ted Barbas to carry on with the dismissal proceedings. St. Athanasius parishioners and the media who reached out to the Metropolis of Boston with questions, and expressions of dismay for this unfair and cruel decision and the demeaning actions that followed, were simply confronted with unanswered emails and phone calls. 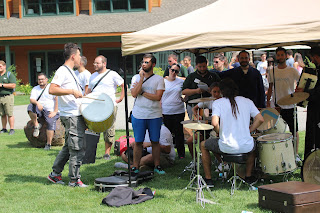 Chancellor Fr. Ted Barbas was nowhere to be found either, instead taking some R&R at the Metropolis of Boston Camp in Contoocook New Hampshire (picture above taken on August 1st). At the same time, the St. Athanasius community was going over the cliff with the news and realization of what they were losing and what the future held for the community.

Fr. Nick was not allowed to retrieve his personal belongings from his office and instead two days after Fr. Nick's final Liturgy his office was 'raided' for a second time by certain members of the parish council and the Metropolis (including the 'guy with a box over his head'! in an apparent attempt to hide his identity) to inspect, and remove his personal belongings and other parish records. The Church locks were changed and parishioners that went to worship were turned away when certain parish council members called the APD.

The reaction of the St. Athanasius parishioners was immediate, courageous and deeply emotional. An estimated crowd of over 1500 people attended Fr. Nick's last celebration of the Divine Liturgy on Sunday July 30th. Social media and local print and television news media were abuzz with the stories of many parishioners that came forward to support Fr. Nick and share their personal experiences and stories from his ministry. The parishioners started a gofundme campaign that has raised to-date almost a third of its $100 K goal,, and an online petition that has gathered almost 2200 signatures and 850 comments. On Wednesday, August 2nd an estimated 200 parishioners held a vigil in a rain-storm sharing personal testimonies of Fr. Nick's pastoral love and personal attention. 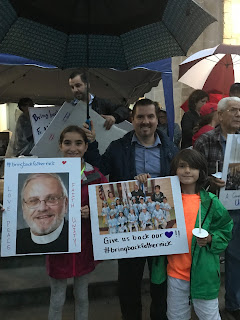 For his part, Fr. Nick remained attentive, calm, focused and personally engaged with all of the people that were grieving. As he has done countless times in his almost 30 year pastoral ministry, he comforted, calmed and  spoke of faith in God, peace and reconciliation. He quieted the crowds when they expressed their displeasure at the mention of Metropolitan Methodios's name, and hugged and blessed the APD police officers that came to pay him tribute at the end of his final Liturgy. He was gracious and forgiving, a true example of a 'foot-soldier of Christ' as he described himself.

Simply put he was the Fr. Nick as we all know, respect and love.

In these dark moments, he is the rays of light that emanate from the Paschal candle Orthodox Christians so anxiously wait in the darkness of Holy Saturday night to celebrate the glorious feast of feasts, the Resurrection of Jesus Christ.

As Fr. Nick joked at his last sermon, he almost chanted the 'Christ is Risen' hymn to a crowd so large that reminded him of the crowds of faithful that come to attend Holy Saturday night services.

And with hope, faith and love the light shall overcome darkness.